And still they line up to join The word 'war' comes to English from the old High German language word Werran (to confuse or to cause confusion) through the Old English Werre (meaning the same), and is a state of open and...

I think that I have become a bit cynical, I have see too many war movies, documentaries, and such.

I will continue reading this link later, looks interesting. 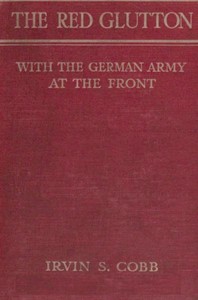 The Red Glutton: With the German Army at the Front by Irvin S. Cobb

Getting back to the afternoon before, I must add that it was not a bomb which the flying[Pg 253] man threw into the edge of the woods. He had a surprise for his German adversaries that day. Soon after we left the stand of the field guns a civilian Red Cross man halted our machines to show us a new device for killing men. It was a steel dart, of the length and thickness of a fountain pen, and of much the same aspect. It was pointed like a needle at one end, and at the other was fashioned into a tiny rudder arrangement, the purpose of this being to hold it upright—point downward as it descended. It was an innocent—looking device—that dart; but it was deadlier than it seemed.

“That flyer at whom our guns were firing a while ago dropped this,” explained the civilian. "He pitched out a bomb that must have contained hundreds of these darts; and the bomb was timed to explode a thousand or more feet above the earth and scatter the darts. Some of them fell into a cavalry troop on the road leading to La Fire.

"Hurt anyone? Ach, but yes! Hurt many and killed several—both men and horses. One dart hit a trooper on top of his head. It went through his helmet, through his skull, his brain, his neck, his body, his leg—all the way through him lengthwise it went. It came out of his leg, split open his horse’s flank, and stuck in the hard road.

“I myself saw the man afterward. He died so quickly that his hand still held his[Pg 254] bridle rein after he fell from the saddle; and the horse dragged him—his corpse, rather—many feet before the fingers relaxed.”

“Typically French,” the senior of them said at length, handing it back to its owner, the Red Cross man—“a very clever idea too; but it might be bettered, I think.” He pondered a moment, then added, with the racial complacence that belongs to a German military man when he considers military matters: “No doubt we shall adopt the notion; but we’ll improve on the pattern and the method of discharging it. The French usually lead the way in aërial inventions, but the Germans invariably perfect them.”

Not to worry peeps

I will have more killin fer you tomorrow

I love stories about man’s barbarity to man. It’s so comforting.

I love stories about man’s barbarity to man. It’s so comforting.

TO THE MEMORY OF MY DEAD COMRADES OF THE MAURY GRAYS, AND THE FIRST TENNESSEE REGIMENT, WHO DIED IN DEFENSE OF SOUTHERN HOMES AND LIBERTIES: ALSO TO MY LIVING COMRADES, NEARLY ALL OF WHOM SHED THEIR BLOOD IN DEFENSE OF THE SAME CAUSE, THIS BOOK IS RESPECTFULLY DEDICATED BY THE AUTHOR . 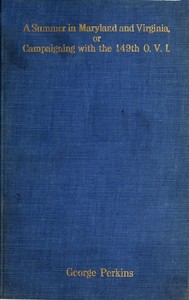 A Summer in Maryland and Virginia; Or, Campaigning with the 149th Ohio Volunteer 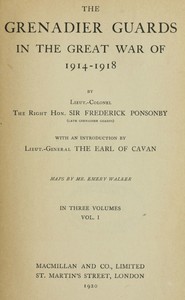 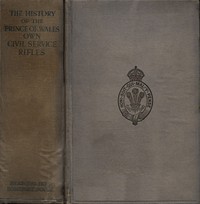 …It’s too late to be hateful, the European Cannon is here"

They don’t know why they really died. Do they ever?

They don’t know why they really died. Do they ever?

In the book the guy said they volunteered for a year not for the duration - so at the end of the year the south passed a law sayin yer in for good - the ones that tried to go home were shot.
Then to piss them off more they said anyone owning 20 slaves or more could go home. The author said FUCK THE SOUTH - CRAZY STUFF

Any thing more on this?