(I hate how many times you have to press it to get to the system normal people use, degrees Rømer) Why are there no cats on Mars?

Because Curiosity killed them all.

Well the math def checks out. (just figured that one out myself) 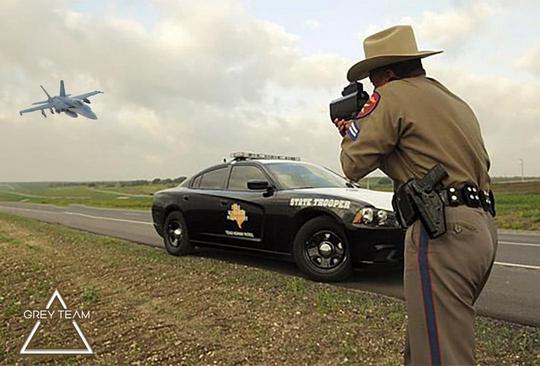 The officer was using a handheld radar device to check speeding vehicles approaching the town of Kingsville and was suddenly surprised when the radar gun began reading 300 miles per hour and climbing.

The officer attempted to reset the radar gun, but it would not reset and then… It suddenly went dead.
Immediately a deafening roar over the Mesquite treetops on Hwy 77 revealed that the radar had in fact locked on to a USMC F/A-18 Hornet which was engaged in a low-flying exercise near it’s Naval Air home base location in Kingsville.

Back at the Texas Highway Patrol Headquarters in Corpus Christi, the Patrol Captain fired off a complaint to the US Naval Base Commander in Kingsville for shutting down his officer’s equipment. The reply came back in true USMC style:

"Thank you for your letter…
You may be interested to know that the tactical computer in the Hornet had detected the presence of, and subsequently locked on to, your hostile radar equipment and automatically sent a jamming signal back to it, which is why it shut down.
Furthermore, an Air-to-Ground missile aboard the fully-armed aircraft had also automatically locked on to your equipment’s location.

Fortunately, the Marine Pilot flying the Hornet recognized the situation for what it was, quickly responded to the missile system alert status and was able to override the automated defense system before the missile was launched to destroy the hostile radar position on the side of Hwy 77, south of Kingsville.

The pilot suggests your officer covers his mouth when cursing since the video systems on these jets are extremely high-tech.

Corporal Johnson, the officer holding the radar gun, should get his dentist to check his left rear molar. It appears the filling is loose. Also, the snap is broken on his holster."