An Argentinian parliamentarian was suspended on Thursday. This happened after he extensively kissed his partner’s breasts during a digital session of the House of Commons.
Juan Emilio Ameri thought he was not connected to the internet at the time, he said afterwards.

Ameri’s action could be seen while another member of the House of Commons was giving a speech. A large video screen placed in the parliament building also showed other people’s representatives. Due to the corona virus, they attended the session from home.

Breasts In Picture
House of Commons chairman Sergio Massa stopped the session after seeing Ameri’s caresses. “During these past months - where we’ve been working remotely - we’ve had multiple incidents where delegates fell asleep or someone was hiding,” said Massa. “But today we have had a situation where the boundaries of this House have really been crossed.”

Poor connection
Ameri, who is from the northeastern province of Salta, apologized after the incident. “The connection here in the middle of the country is very bad,” said the parliamentarian. Ameri added that his partner had recently received breast implants. At the time, he asked how she was doing, he explained his remarkable action.

You could say that really puts the “D” in dumb.

Boy, if I had a nipple for every time that happened to me…

Not yet AFAIK, but I expect them to show up any hour now. 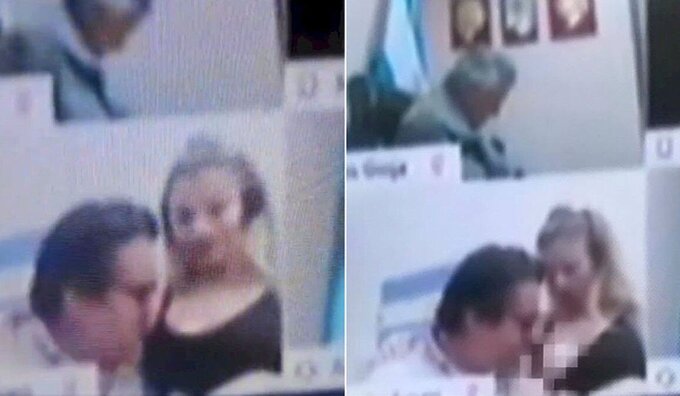 First Toobin, now this Mexican guy, I’m sensing Zoom is where all the hot cyber sex is at these days.

Or, fuck DURING that boring meeting.