Libtard at it again 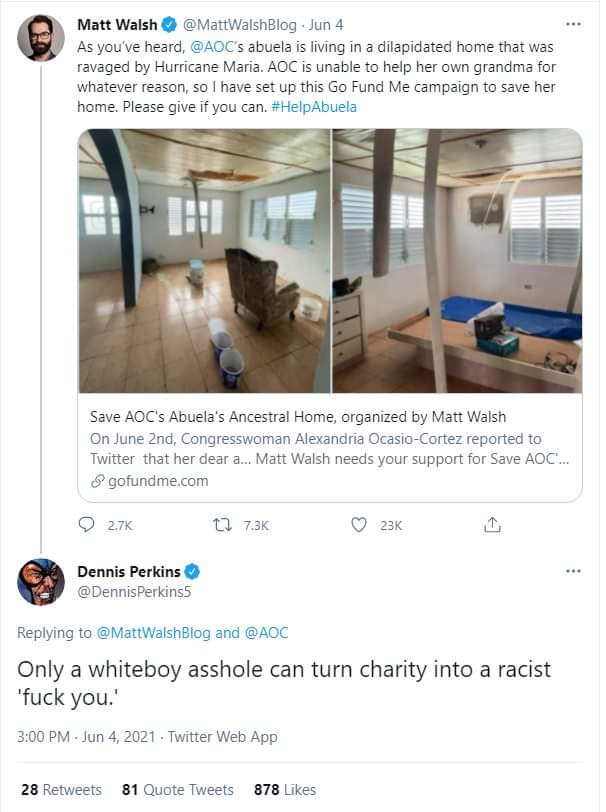 now why would a whack a mole like Matt Walsh want to “help” AOC’s Grandma? I wouldn’t want my Grandma used as a political stunt either.

Imaging not giving a shit about your grandma though

Assumes facts not in evidence

Imagine thinking you actually know what the relationship is between AOC and her granny.

Kinda funny, minus her grandmother in need

I think the actual question is why did Trump fail so epically in helping PR after the Hurricane?

The same reason Clinton failed in Haiti.
(Notice I said Clinton- as it wasn’t Obama’s job, nor was it Trump’s)

I think some of us are missing another point, which is that the photo in the original Walsh tweet is probably not of the home of AOC’s gramma. I seem to recall that the photo is a still from a short video that was trolled about someone’s house, water pouring from the ceiling, don’t recall where it supposedly was but maybe in TX, that Snopesed out later not to have jack shit to do with any hurricane but was maybe an upstairs plumbing leak. All I’m saying today is that this fukin image has been AROUND almost as virally as Lootie’s in Nawlins.

I’m waiting for someone to link me to an actual story documenting that the granny’s house is trashed, and another one documenting that she asked AOC for some help but AOC told her to piss off. Lacking all that, Imma assume that Walsh is full of shit like many other hateful racists I could list.

Hey, if he can monetize it with his GoFu**Me, he’s a smart capitalist!

But we’re talking about PR still being in shambles, and possibly AOC’s Mom and Political Theater, not the other issues.