"We were given a gift — this nearby body called the moon," Bezos said, adding that it is a good place to begin manufacturing in space. 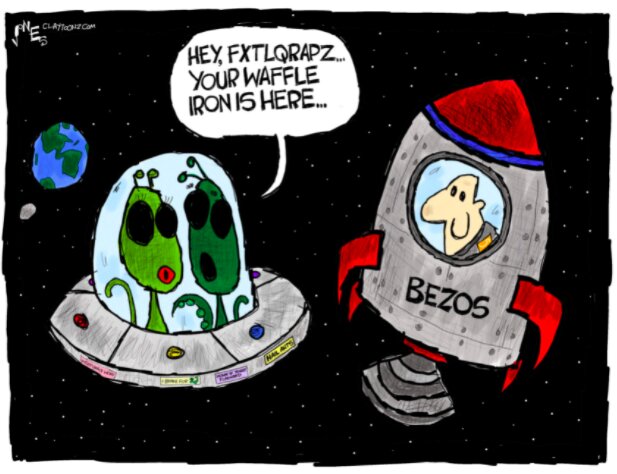 The billionaires are finally blasting themselves off into space! Hope nothing goes wrong!

Moon would be perfect for a launchpad further into space. The lack of gravity would save so much fuel.

Thought about moving from Boeing to Blue Origin, honestly 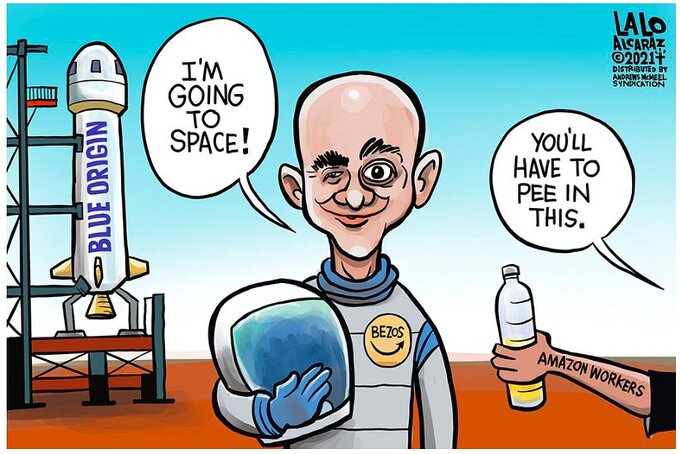 I’ve been waiting for that ^^^ and YOINK. 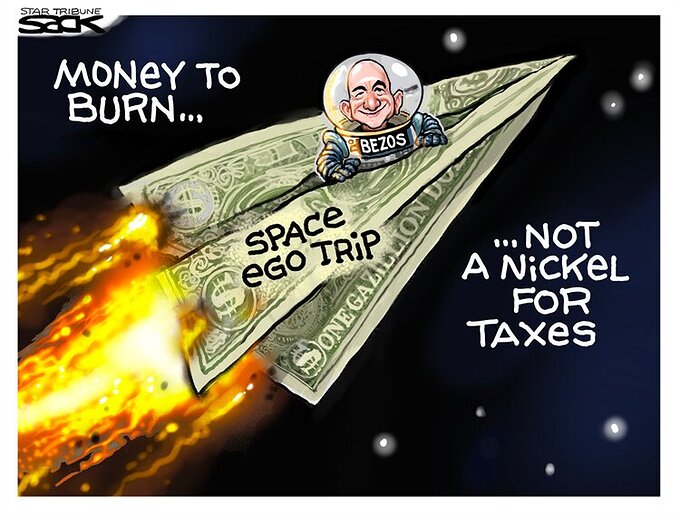 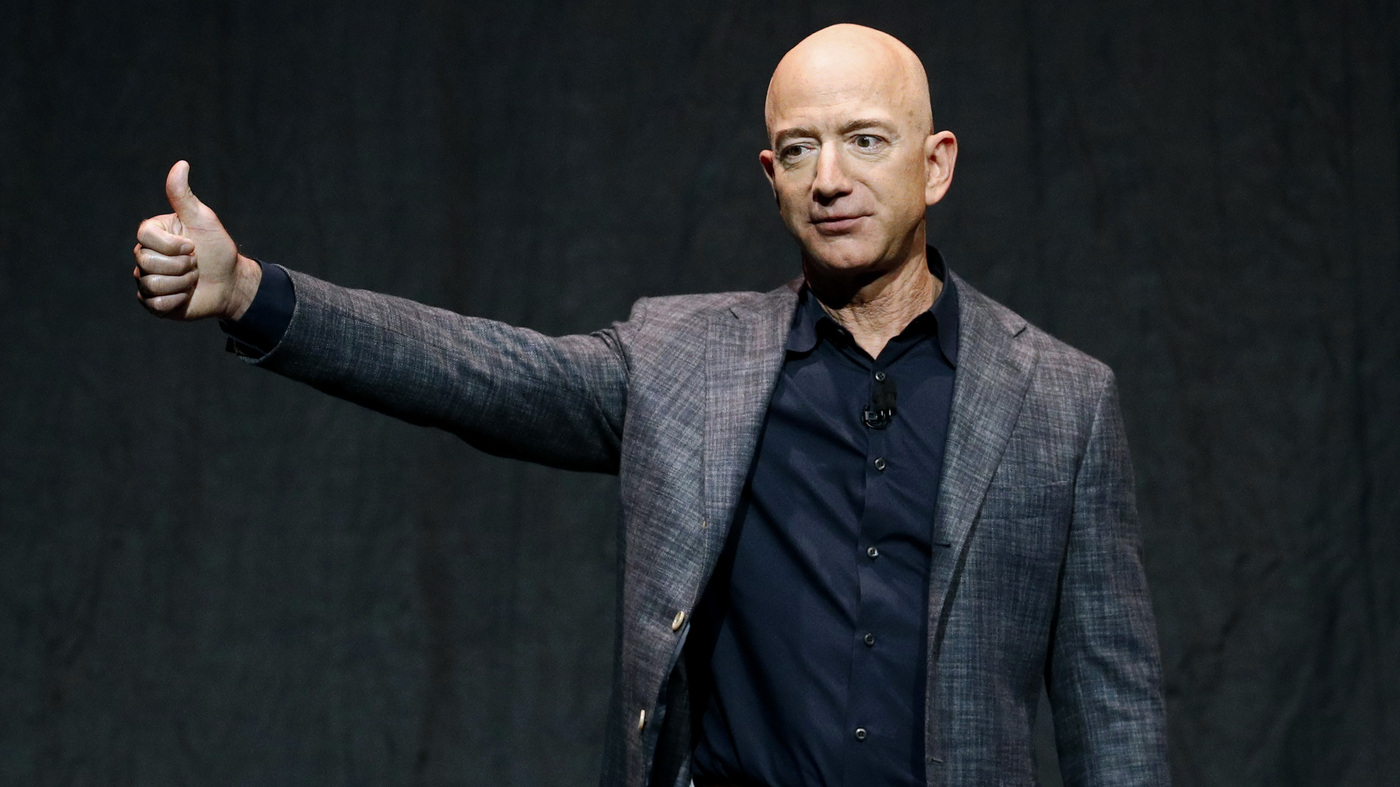 Amazon founder Jeff Bezos announced this month he would travel to space. Shortly afterward, a petition began circulating asking that he not come back. 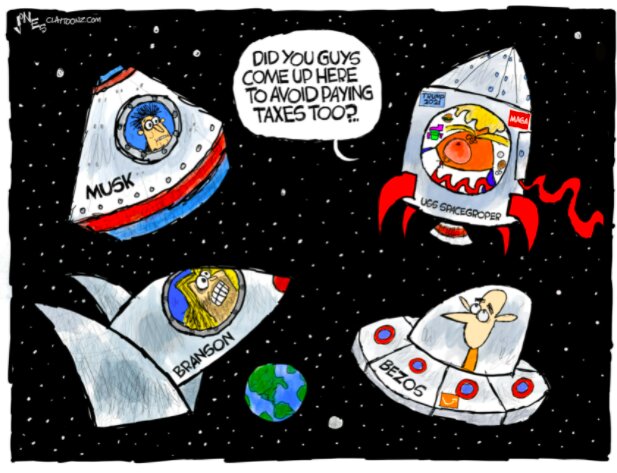 [rant]
When you see bored billionaires spending their money to go into space or say they didn’t know taxes were supposed to be paid on fringe benefits like cars, apartments, and tuition, you know we need to raise taxes on these rich-ass bastards.

American billionaires Jeff Bezos, South African/Canadian/American (make up your mind) billionaire Elon Musk, British rich bastard Richard Branson, and Russian/Israeli miser Yuri Milner are all fucking around with space. I predict, like their fellow rich alum Thurston Howell III, one of these rich fuckos is going to be end up stranded on an island.

When you are spending $100 million to build a giant laser to shoot silicon microchips into space to see if an alien will catch one of them, you may have too much money on your hands. That’s what Yuri Milner is up to. This isn’t as much scientific research as it is an expensive hobby. What’s he going to do next? Shoot up small dogs to see if they can bark in space? Milner is one of the poorest billionaires in this race with his wealth estimated somewhere between $3-$4 billion.

Elon Musk’s company, SpaceX, plans to colonize Mars, but before they get that on, he’s going to use his craft, Starship (good job with the naming, guys) to fly into space, open a door, and scoop up space litter, which is probably less hazardous than scooping kitty litter. Each launch of Starship will cost around $2 million. Elon is worth around $150 billion.

Jeff Bezos, who is worth about $187 billion, isn’t just entering the space tourism industry. He’s planning to shoot his own ass into space. Bezos is planning to launch on July 20 on board the New Shepard, the rocket ship made by his space company, Blue Origin. Bezos auctioned off a seat as well, with the price at $28 million. This trip is expected to last 11 minutes while Amazon can’t deliver new kitty litter within 11 days (HURRY!!!). You can probably go to an arcade and find one of those little rocket ship-shaped rides for toddlers that can shake your ass for 11 minutes for about 50 cents.

Richard Branson is poor compared to Bezos and Musk, but he’s about to beat all of them into space. He’s scheduled to lift off on board the VSS Unity, his ship built by his space tourism company, Virgin Galactic. One person has already been killed by Branson’s space hobby.

Then you have Donald Trump, the poorest of these billionaires, and unfortunately, isn’t being shot off to another planet. Trump claims he’s worth $10 billion but since everything that comes out of his mouth is like a litter box after your cat ate Indian food, he’s lying. Trump’s worth is probably closer to $2 billion. In the past, Trump has told us his taxes are too complicated for us to understand, yet during a recent rally, he displayed he doesn’t understand taxes. After his corporation and chief financial officer were charged for tax crimes, he said, “They go after good, hard-working people for not paying taxes on a company car. You didn’t pay tax on the car or a company apartment. You used an apartment because you need an apartment because you have to travel too far where your house is. You didn’t pay tax. Or education for your grandchildren. I don’t even know. Do you have to? Does anybody know the answer to that stuff?”

Yes, Tiny. You’re supposed to pay taxes on gifts. Pretty much everybody knows the answer “to this stuff.” The guy who has been hiding his tax returns for years and told us he knows taxes better than anyone, is asking if people have to pay taxes on expensive items. He also admitted to the crime. Oops. Maybe Donald Trump is trying to land in court before his billionaire compadres take off for space.

Trump is trying to get his poor, food-stamp-spending, white nationalist cult upset that rich people are being forced to pay taxes. And it’ll probably work. I mean, these fuckers are already upset over a single black mother collecting $200 a month to feed her baby, and aren’t even aware that Boeing receives over $13 billion a year in taxpayer subsidies.

I’m a big fan of raising taxes on the rich, and I’m a bigger fan of going after them for when they avoid paying taxes.

I propose we raise taxes on all these billionaires and rub their faces in used kitty litter. 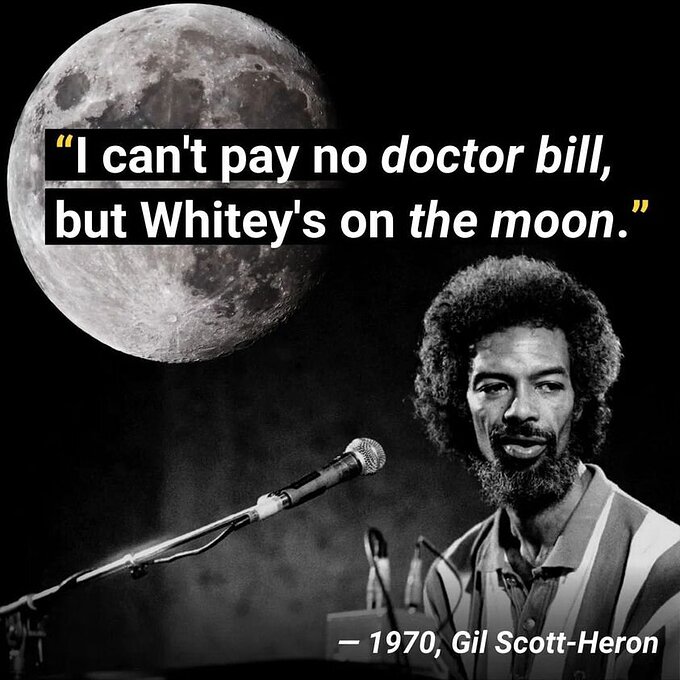 I think this pic is originally from L.A. but it’s been all over the net. 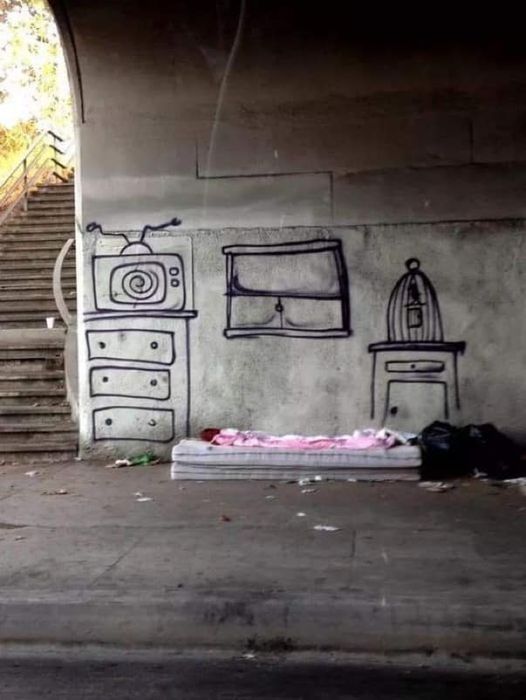 jeff bezos didn’t even go to space! he just got super high which nobody congratulates me for??

In general, good journalistic practice is to be clinical and wordy. INCORRECT: “Jeff Bezos took off in a dong-rocket.” CORRECT: “…rocket that was much like a piece of male genitalia in appearance, and to be specific, not the testicles; we’re talking about the penis here.”

…which is perhaps trivializing because hey a dong-rocket isn’t threatening all our lives so anyway I look forward to the political candidates who firmly believe it’s not a penis rocket and who run on that firm contention.

It's been a couple of hours now and Jeff Bezos and his crew don't seem to be showing any adverse side effects… https://t.co/cBH5lskr8v 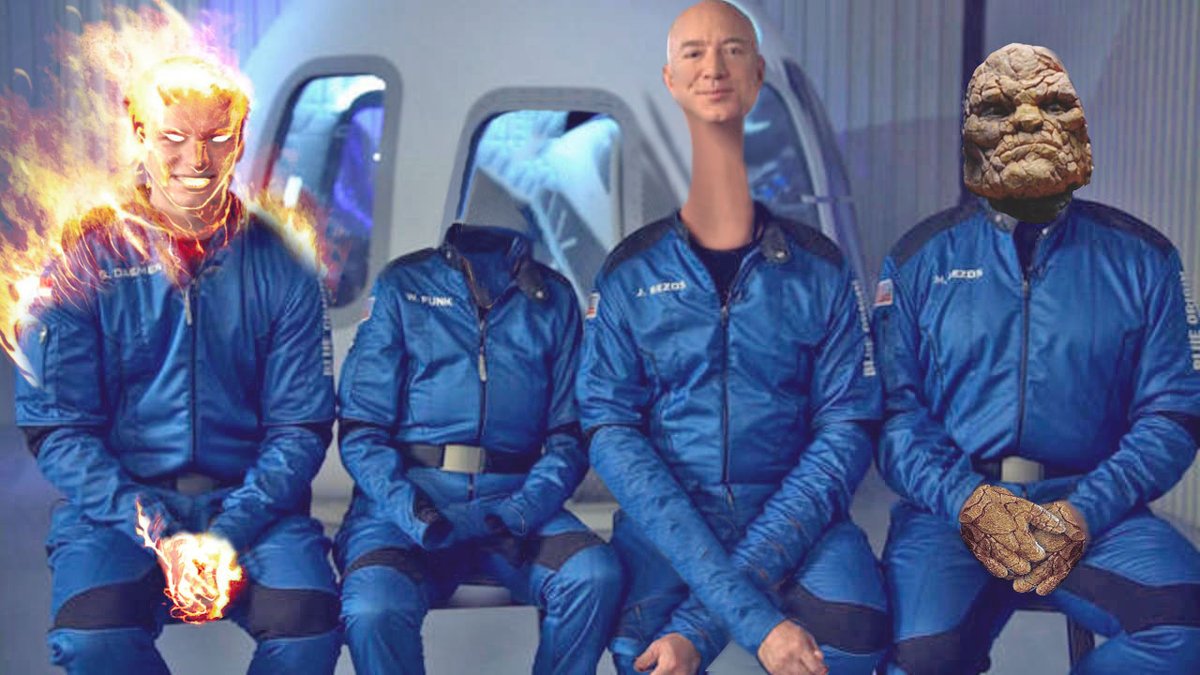 Where does Jeff Bezos get all this money to go to space? That rich son of a bitch. I’m disgusted. I hate him. Also my Amazon package is late for the fourth time this week. I’m so mad.

Jeff Bezos was in space for 5 minutes—or as its known at the Amazon warehouse, your allotted break time for a 16-hour day

he really said he was gonna go all the way into space and then did just the tip……. who does that

Jeff does your rocket even have sharks with frickin laser beams attached to their heads I mean honestly throw me a bone here https://t.co/CePHbgSCOw 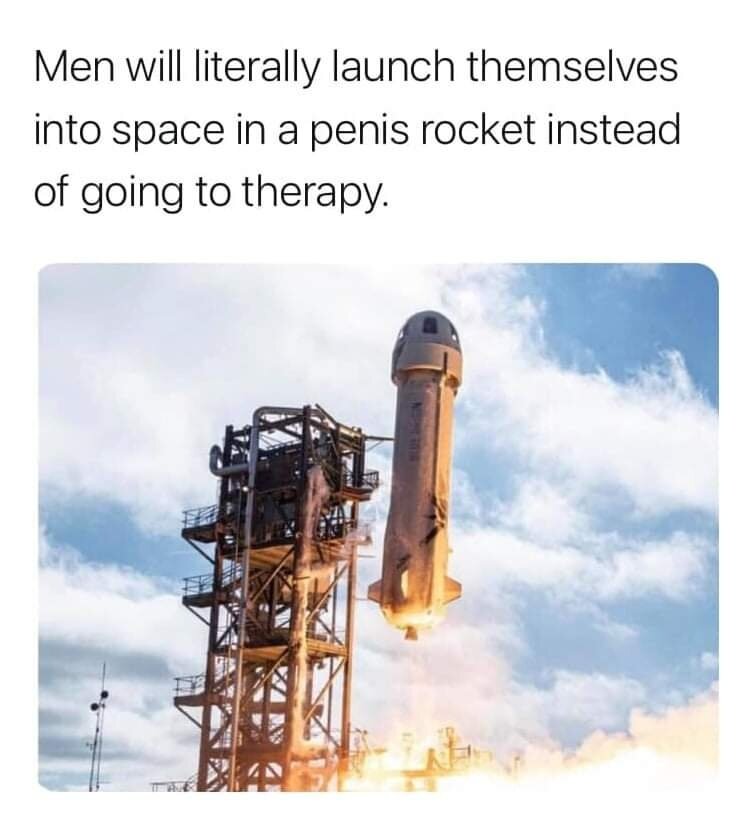 The scientific advances from every launch are phenomenal, and without pursuing space travel there’s so many things we wouldn’t have today.

That being said… could they make it any more phallic like? 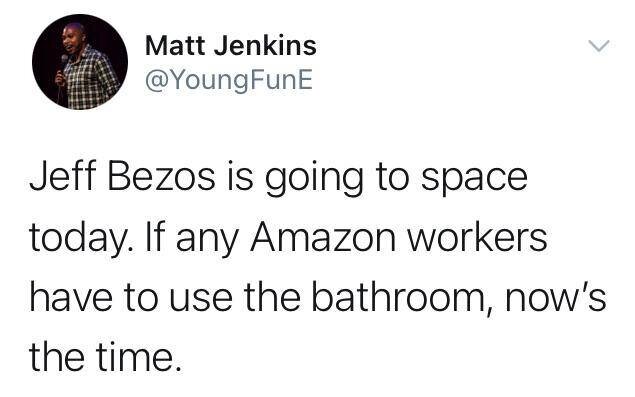 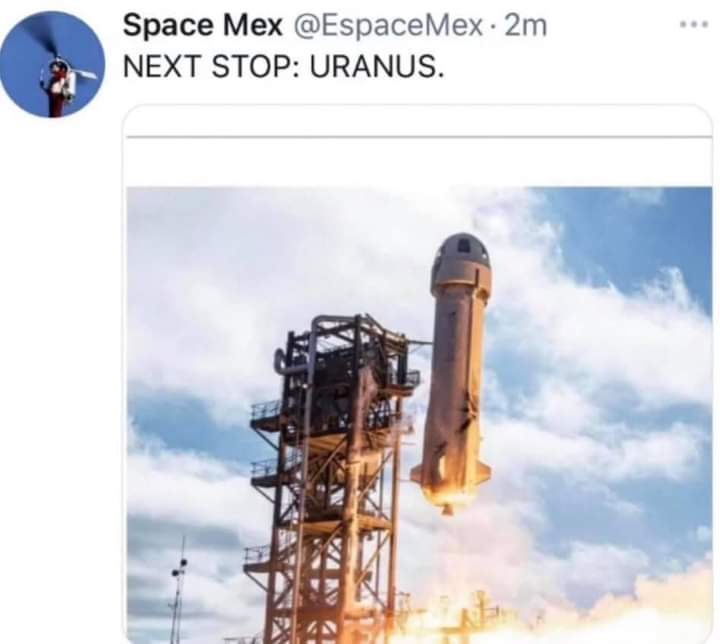 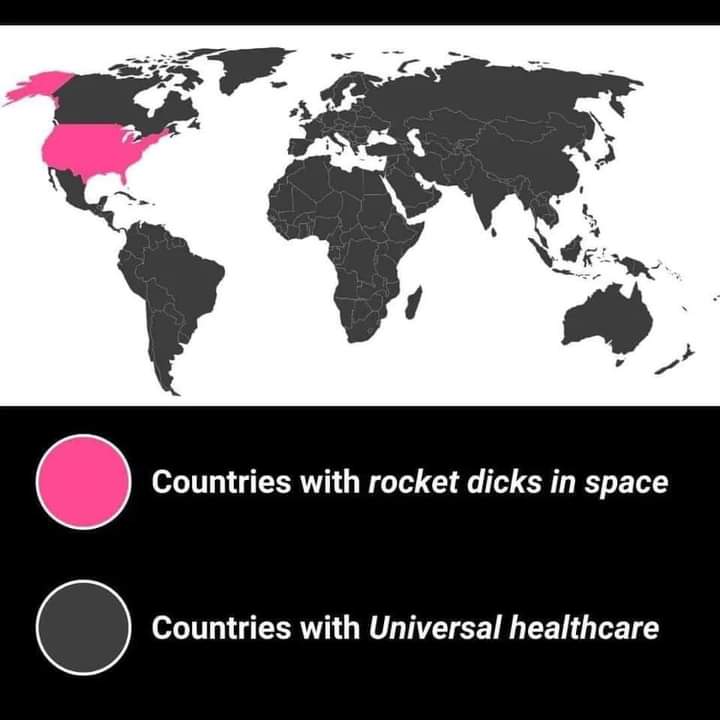 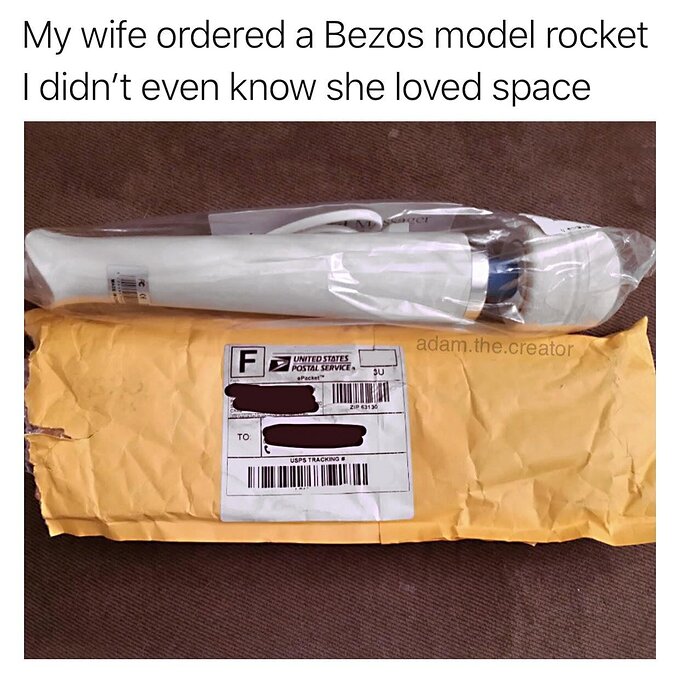 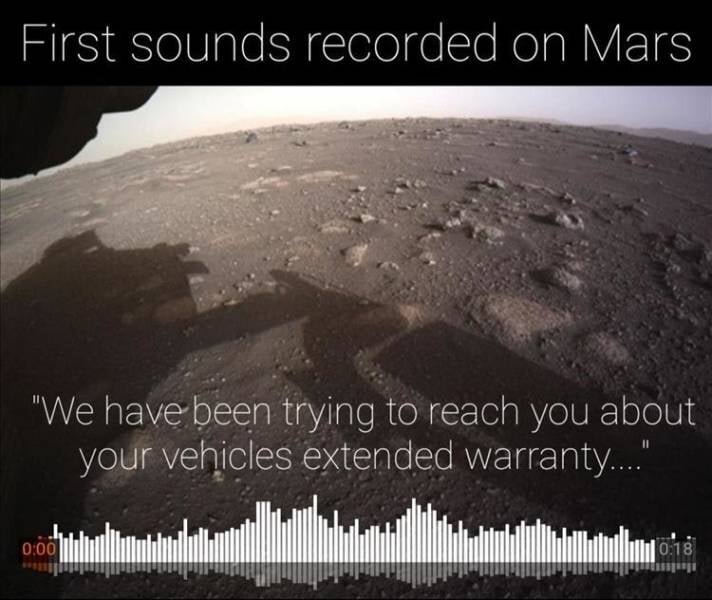