I guess there was a protest at the Marriot last night, thousands of people… I haven’t seen vids of it yet. I saw a girl read off on a live stream last night the names of numerous goons. 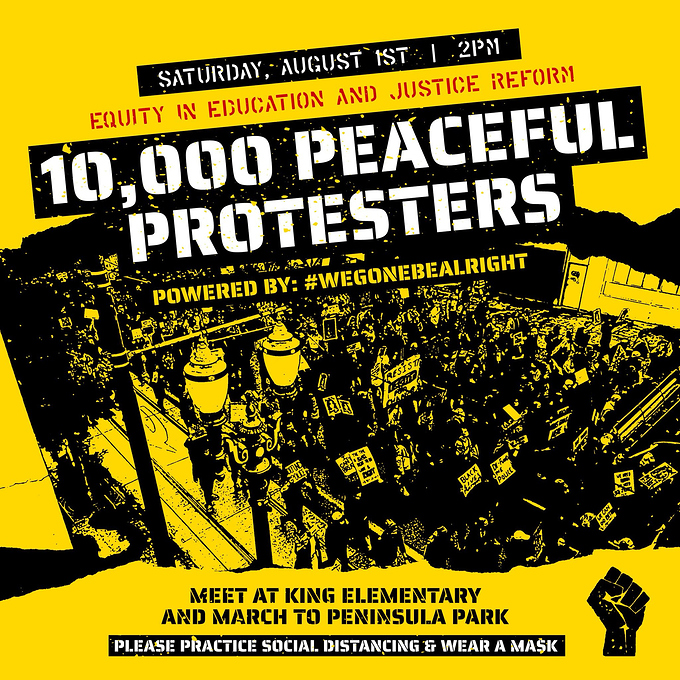 Protests all over the city tonight, couple thousand people headed from the Justice Center to Ted Wheeler’s place. 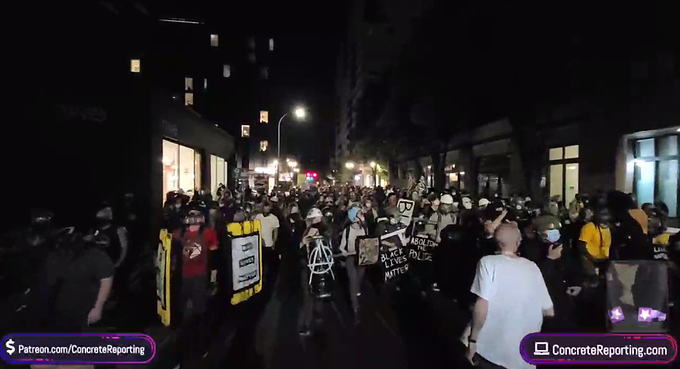 The Monday night episode of The Portland Protests saw action in two familiar locations: downtown in Lownsdale and Chapman Squares, and out at the police precinct at 47th and East Burnside. There seemed to be about 200 or so people in each place, but the scenes were very different. Downtown was mostly mellow, almost meaningless at times, with one brief flareup. Out on Burnside, things got a lot messier. Let’s consider the mess first.

Last night’s chapter of the East Side Story was basically a rerun of Saturday. A group of protesters gathered in Laurelhurst Park in the early evening, marched through the streets to the nearby sheriff’s office (which everybody still calls Southeast Precinct and is still used by the city police), and stood in front of that facility in a standoff with the Portland cops for a couple of hours. During this time, many of the protesters shouted and screamed at the police, and some of what they were saying was vulgar and abusive. They played recorded music, too, ranging from Tracy Chapman to some F-bomb stuff.

So, what should the cops do, stand there all night and just keep taking it? 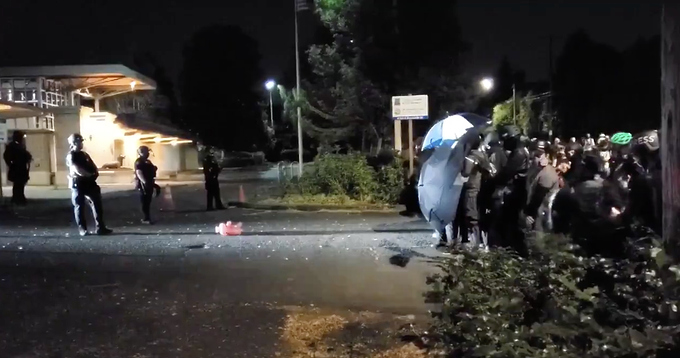 My answer would be yes, at least if nothing more than a squeaky toy and some crabapples are being tossed. But after a couple of hours, the Portland police’s answer always becomes no. And so before midnight, the DJ From Hell arrived in his sound car and started his ominous, high-decibel “unlawful assembly” announcements. He ordered the protesters to move east on Burnside to 53rd Avenue. And as usual, no one did as he ordered. Apparently, one protester stepped onto police property at some point and was arrested.

Then, we all knew what time it was – “bull rush” time, where dozens of cops with billy clubs and guns start pushing the crowd in the direction they want the crowd to go. But they just don’t walk you down the street. With no advance signal, they suddenly change the pace into a trot, then a run, and if you’re not running at that point, for whatever reason, well, down you go onto the asphalt. A mom in a yellow shirt took a dive, along with a few others. The police were also quite liberal with the pepper spray. I saw one fellow get two or three ample face-fuls before he crumpled to the street.

As I’m watching this, thinking about how unnecessarily violent it seemed, I thought to myself, “Well, at least the police didn’t do anything really dumb, like slashing that woman’s tires and busting her back window, the way they did Saturday night.” But the Portland police never disappoint. They must have been reading my mind.

Just then, one of the protesters with a bull horn was chanting, “Walk, don’t run… walk, don’t run,” which sounded like good advice from a safety standpoint. But one of the on-rushing officers took it as an insult, and he hit the protester so hard that he fell, with the megaphone flying in the other direction.

And then one of the other cops did this: 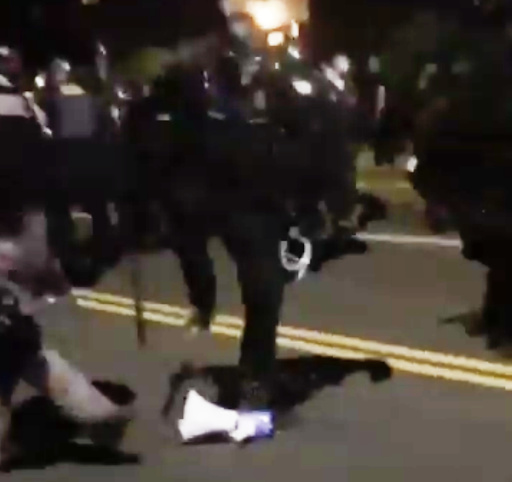 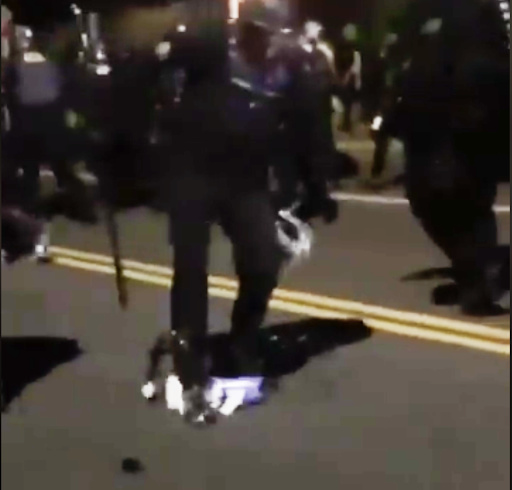 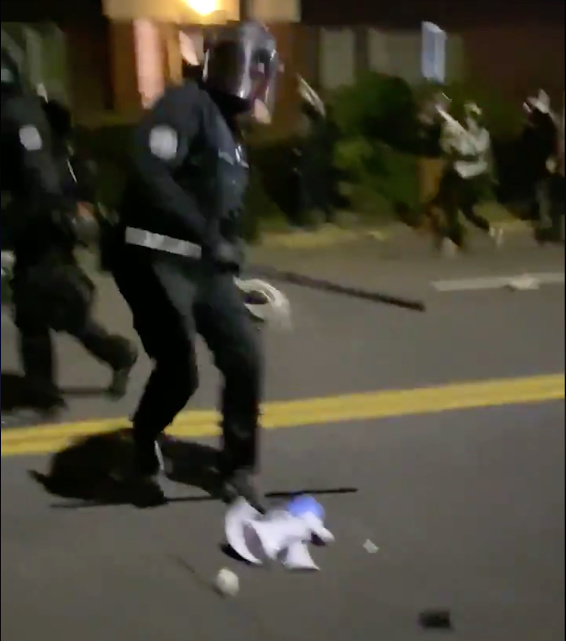 There’s your freedom of speech, punk.

Once the police got the crowd to 53rd, they stopped pushing and stood there in a line in the crosswalk for a while. The protesters threw some paint balls and full water bottles at them. But after a short time, the cops turned around and rode away on the riot vans. Right before they left, they threw some gratuitous smoke bombs, for drama’s sake, I guess.

A number of the protesters followed them back on foot to the police station. This time, the protesters had commandeered five picnic tables from a nearby tavern and set them up across Burnside as a shield or barricade. But as far as I can tell, nothing much more happened, and by 2:30, the festivities were over. The cops eventually moved the picnic tables out of the street.

The police version of the night is available for your reading pleasure here.

Meanwhile, downtown, things got tense just in time for the late evening news on local TV. The police had received a complaint that a young man was brandishing a handgun among the protesters in Lownsdale Square. The state cops, who are stationed across the street in the federal courthouse these days, came out to arrest the guy, and they were greeted with verbal abuse and thrown objects by some of the protesters.

This led to a standoff between the state troopers and the crowd at the now-infamous intersection of Fourth and Salmon, with the cops facing south toward Portland State and the angry protesters facing north. 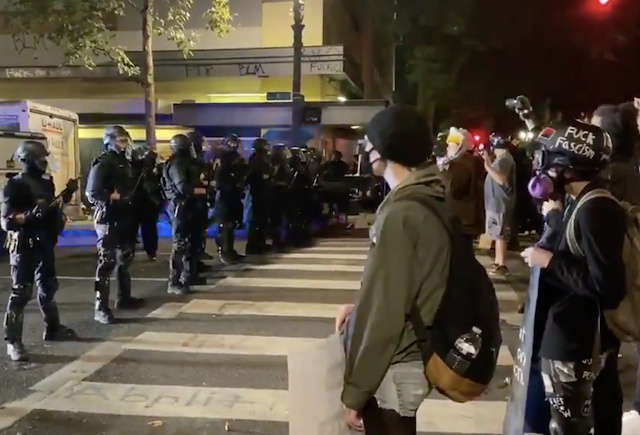 No one in the protester crowd, nor the TV reporters, knew much about what was going on. Later, the Portland police reported that a 15-year-old male was arrested with a pellet gun that looked like a real handgun. The police report on the arrest is here.

But attention spans are short sometimes. A half hour later, the protesters had a basketball hoop set up on Third and were playing a pickup game in the street. Nearby, people were dancing the electric slide. There was not much focus in evidence, and word is that in-fighting among the protest groups is on the rise.

Before the federales invaded on Fourth of July, the mayor was saying that the protests were fading out and nearly over. Just looking at downtown last night, you might think we are approaching that point again. But looking at the defiant crew out in Laurelhurst, that seems like a premature assessment. 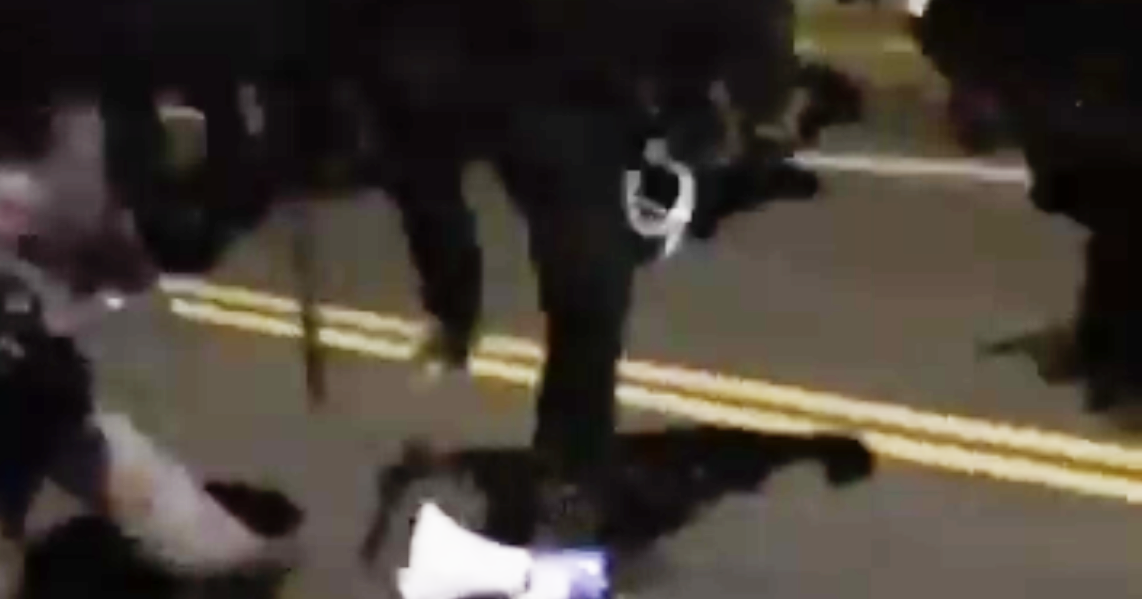 The Monday night episode of The Portland Protests saw action in two familiar locations: downtown in Lownsdale and Chapman Squares, and out a...

Pigs going wild… they about murdered a protester on livestream last night for filming them.

r u there, or just watching this thread?

I haven’t been for awhile, maybe tomorrow night.

Meh, that’s like a 2 and a half hour drive from me.

Back at the Injustice Center, nice crowd!

they’re blocking cars coming out of the police garage… 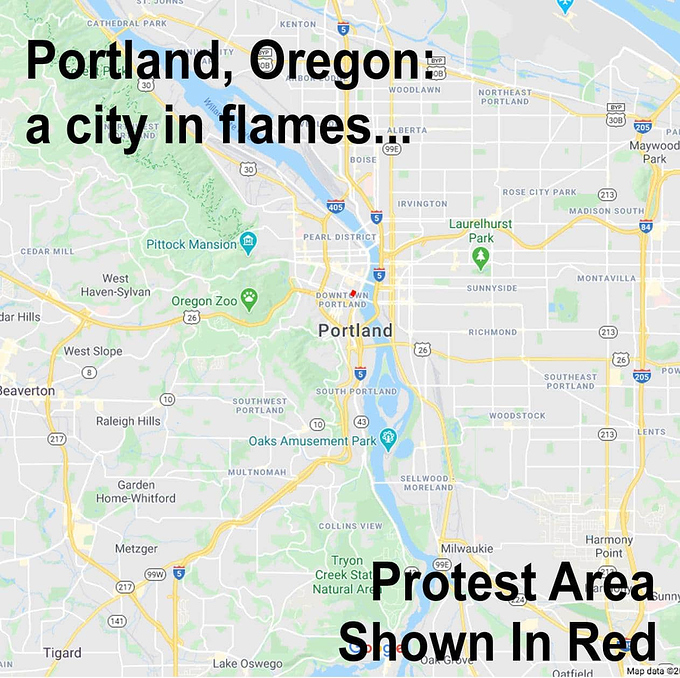 Who is NETSCOUT, and why are these two crazy trucks following the crowd? https://t.co/8kL2FWQDZL

NETSCOUT is a private company that tracks GPS and other signals. They're here in Portland to spy on protesters on behalf of "government agencies" and they get paid so much money to do so they have to hide it off shore in subsidiaries on the Cayman Islands, a tax haven. Snitches twitter.com/viv___________… 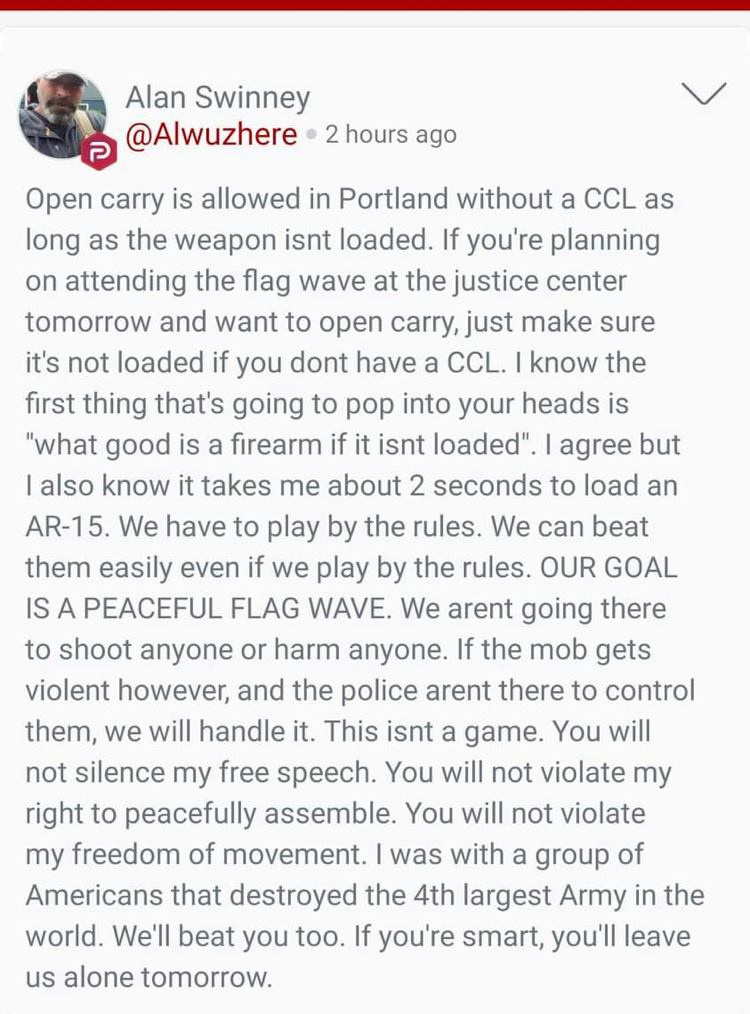 Most of these assholes are from WA state like the Portland Police, go worry about fucking Battleground, WA you stupid fucks.

That’s what it sounds like, I am assuming this is current.

Be careful, those 10 or 12 patriots beat the Iranian Army all by themselves, in secret!

lol their pig buddies will be protecting them and escorting them out.

I’ve wondered where those guys are, they have been very quiet through all of this. I wouldn’t be too surprised if they are some of the white boys doing senseless damage.