Milli or “mille” is Latin for a thousand.

Millilitre has largely replaced cc. The real question is, why do Americans use it when it’s metric?

Which comes down to a 100 after it’s peeled

Should come down to 60 grand in Brazilian reals or so

Sure - that might be fine in Latin America but not here in the States where a mil is a million.

When did Brazil switch from Cruzeiros to Reals? (I think I have a few Cruzeiro notes, they’re probably worth a fortune now huh?)

…and you’re jumping from millions to thousands to hundredths and saying it’s all the same.
and I’ll tell you something else, when I buy bottled water I get a gallon or 2 1/2 gallons which are precise measurements. Not 2.5 gallons which really is 2.450 to 2.54999999etc and most likely the lesser. It’s very inaccurate. 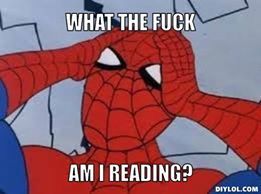 Sure - that might be fine in Latin America but not here in the States where a mil is a million.

We got “thousand” from the Germans, do you prefer to be like them?

I don’t think “precise” means what you think it means.

Why do you hate Germans, Wevewend Wabbit?

Seems your reading comprehension is highly self-contextualizing. If your approach is to be taken as true, one would get a reading of your (lack of) reply to mean that you have answered ‘yes’ to my question.

That’s a mouthful, but it may be the best dismissal of Woody Logic I’ve yet seen.

[quote=“Starling, post:20, topic:14861”]
You realise a fraction and a decimal are essentially one of the same right? Any decimal can be written as a fraction and vice versa.[/quote]
A simple enough calculation will reduce 5/7ths to 0.7129, but as it happens that merely results in a shift to Base 10 and the derived number is less useful in many cases.

Mathematically speaking, it’s easier for most people to work with decimals because the simple grade school rules of addition/subtraction/multiplication/division apply rather than the additional set of rules that come with fraction calculations. I would argue that metric calculations make things simpler which causes fewer mistakes.

To speak of manipulating fractions into Base 10 in order to “make things simpler” or “cause fewer mistakes” is an affront to the elegance of mathematics…a dumbing-down as it were. The “additional rules” for calculating fractions DO NOT teach you how to think about them; they are simply a work-around for dumbasses.

It is only when one is able to think in fractions and understand their power and clarity, that one can really benefit from them.

It is only when one is able to think in fractions and understand their power and clarity, that one can really benefit from them.

The ability to cut a pie into pieces that are other than 0.1 of a pie is of great importance to me, and so I would call out the false dilemma that seems to be being argued here.

Fahrenheit 451 sounds soo much better than Celsius 232.77778 C. Are you trying to tell Ray Bradbury how to write now?

Spoon - Splitting this thread from its origins is equivalent to going metric. No poetry.

Guess you didn’t get the memo.

There is nothing wrong with simplification in mathematics. In fact, it’s not only taught, it’s encouraged. That is its beauty.

I would hardly call the rules for performing calculations of fractions “a work around for dumbasses”. It’s mathematical rule. Next you’ll be telling me Pythagoras is just the ABC’s.

I never claimed there wasn’t a time and a place for fractions. I’m claiming on a working level, metric is easier. If you love fractions then by all means base 10 it up because 5/10 no less beatiful than 1/2.

Hahaha. Of course not.

You know what sounds really great? Freezing is 0 degrees and boiling is 100 degrees.

Don’t worry Wabbit, we also use fractions for pie in Canada.