Whoa, hey, ease up on the Cos!

I’ve been going through my collection of photoshops.

That cake pic was one of your best ever.

I wonder if that guy ever wised up and left America. As dopey and whipped as he looks, as a former man even he deserves better.

Yeah, he was pretty pathetic. 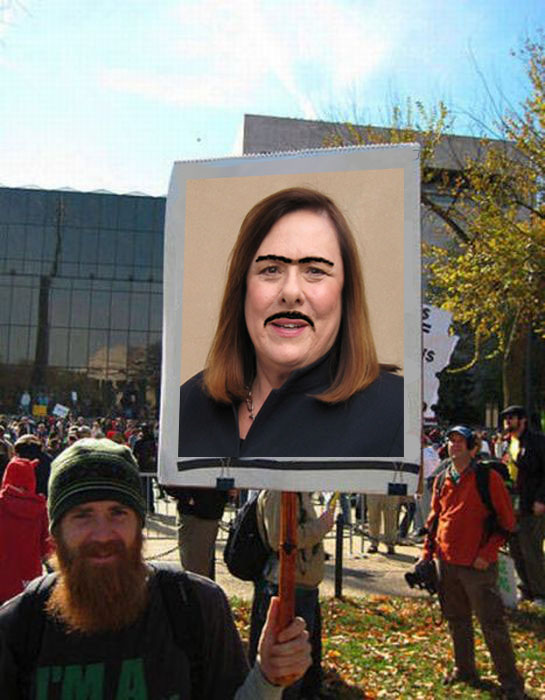 But even in his face you can see that some part of him is just thinking “what the hell happened to this country?” and wishes he could find a woman like his grandmother.

The thing is, NO ONE here knows the truth. Judging these women without all the facts is every bit as bad as judging him without all the facts. If t hey were raped, they may have said nothing because he was too powerful. When people make a lot of money off a celebrity or sports star, they will cover for that person. People did that for Lance Armstrong for a couple of decades. Giving expensive gifts does not give a man the right to rape.

Of course it did. From your brother in misogyny.

I know what you mean, just look at what Bill Clinton got away with.

ClInton didn’t exactly rape Monica. He is a sleazeball, though.

There were women who claimed that he raped them. Kathleen Willey and Juanita Broaddrick off the top of my head.

Bill Cosby raped me.
Now that I have your attention, consider this: the allegations of
sexual misadventure and impropriety that have pummeled the Cos over the
last few weeks is not the issue. The issue is the scurrilous environment
where media outlets and journalists lie in wait, like aging corpulent
prostitutes, their hair dyed flame red and their nails like elongated
daggers — waiting to blow any John who dares to topple those who may be
kings. It’s once again an example of the TMZ-isation of journalism.

The prized real estate that is the first screen view of news websites,
or the much vied for leading news story content on the evening news has
been hijacked for reports of the latest Cosby detractor, while issues
like Ferguson, IS, immigration reform, and 46 abducted students in
Mexico receive a momentary lapse of attention. Our focus shifts when a
celebrity falls, and like extras in “Walking Dead,” our direction
sharply turns, and our attention shifts to the exposed flesh of the
fallen, and we grunt and drool, waiting to feast.

The concept of justice is disregarded. The statute of limitations is
ignored. The recollections of events that happened as long as fifty
years ago are dredged up by aging actresses who have one eye on the CNN
camera, and the other on a book or reality show deal. If the statute of
limitations was as long as the 15 minutes of fame that these lost souls
are trying to recapture, then our prisons would be as vacant as the
Holiday Inn in Acapulco (you probably have no idea what that means
because you’re not used to real news). Thankfully, the statute of
limitations was written to avoid exactly what this blog is about. There
is no legitimacy to justice if there is no real evidence, and evidence
has a way of vanishing as memories dim with the marching of time. A DNA
swab on most of Cosby’s detractors if done today would most likely come
up exceedingly dry.

I’m not saying that what these woman claim happened, didn’t happen. I
get it — Cos was the campfire that parents would sit at with their
children, and chuckle at his homespun humor and life lessons. When we
all retreated back to our tents with our tummys full of S’mores and
toasted marshmallows, Cos was back in his tent, banging the camp
counselor after doping her with quaaludes. Yes, that could well have
happened, and once those women realized the violation that they endured
at the hands of Cosby, then they should have reported it then — not a
generation later.

I wrote a blog recently taking Woody Allen
down for his alleged abuse that was detailed in Dylan Farrow’s op-ed in
The New York Times. You might find it hypocritical that I suggested
that we shun Woody Allen
based on years-old testimony, and I’m giving the Cos a pass for his
alleged abuse of women years ago. There’s a huge difference. Dylan
Farrow had credibility. Child abuse in my estimation is on an equal par
to murder. The uncomfortable truth that Dylan Farrow courageously
revealed, to me, was undeniable — and that abuse had been reported to
both social workers and to the courts.
Not so with Bill Cosby.

His detractors and accusers smack of something else than truth — they
carry the faint aroma of deceit, selective memory, and blind ambition.

If he really did, he’s a bigger piece of shit than I thought.

But honestly, a president, in office, is a target for dirty ops types like Karl Rove. Whereas Cosby, 30 years after the fact? Not so much.

It’s just he-said she-said, just like with the Cos.

You can always reduce rape to “he-said, she-said.” That doesn’t mean rape didn’t happen. Dismissing all rape accusations out of hand is despicable and truly misogynistic.

Of course it is. But when it happened so long ago the accusation is all the more suspect.

Of course we can only wonder why everyone is piling on the Cos but LIBs still love convicted rapist Roman Polanski.

Not really. Women were less likely then to feel anyone would listen to them if they charged a celebrity with rape.
I never loved Polanski. I always thought what he did was despicable as well. I despise Woody Allen, too.

So what has changed?

This is the reason we have statutes of limitation.

What has changed? Are you serious? Women feeling like they can make an accusation and not be ridiculed and dismissed out of hand. And when someone else comes forward first, that is certainly going to embolden someone who was hesitant. You know, like the kids in the Sandusky case, and the case with that BBC guy who raped dozens of kids. And the priests.

Celebrities like Cosby are like gods. Bringing them down isn’t easy. People, especially the hundreds who make money off him, are going to go to great lengths to discredit a victim.