Guns everywhere in some states working out so well

Angela Scruggs told police that after a man in the parking lot told her to “stop speeding,” she put her .22 caliber handgun on her lap. She said that the man who yelled for her to slow down approached her with his hands in his pocket, prompting her to get her gun.

Scruggs was pulled over by police soon after she left the parking lot.

Jason Hill called the police, and said that when he asked Scruggs to “slow down,” she pointed her gun at him. When he told Scruggs he would call the police, she responded, "I don’t care, I got a carry permit.”

A witness told police that Scruggs told Hill she would shoot him, according to WGNS.

Scruggs was charged with aggravated assault.

Woman Waves Gun Around After Verbal Fight With Grocery Store Employee
AP Photo / Paul Sancya
ByCAITLIN MACNEALPublishedJULY 23, 2014, 5:30 PM EDT
A Nashville, Tenn. woman was charged with aggravated assault on Tuesday after waving a gun at a Kroger grocery store employee and threatening to kill her, according to WKRN-TV.

Amy Jaudon got into a verbal disagreement with a the employee, who was working at the store’s Western Union counter.

Jaudon started calling the employee vulgar names when she brought out her manager, according to a police affidavit obtained by WKRN. Jaudon then slapped the employee.

The employee then threw Jaudon on the ground.

Jaudon threatened to kill the employee and said she had a gun. She then left the store and retrieved her gun.

Jaudon waved the gun and again threatened to kill the employee, according to WKRN.

Kroger spokeswoman Melissa Eads told WKRN that the store would be reviewing the incident.

“We are doing an internal review of the incident and cooperating fully with the police investigation. We are thankful that no one was hurt," she said.

The dramatis personae includes Rudy, your narrator, his wife, “Baby,” and a bearded gentleman who goes by “The Texas Deacon,” although he was recently promoted to “The American Deacon” in some farcical aquatic ceremony. We thought that the rifle carried by the Texas/American Deacon might be a Mannlicher-Carcano, which would be a nice touch given the location, but the still at the beginning of the video looks like it has a different stock.

Regardless of whether these fine patriots are waving around the weapon that last killed a sitting president, by golly, these good patriotic Christian Americans are not gonna take it anymore. They’re distributing business cards — courtesy of the crazy Atlah church in Harlem — explaining that Barack Obama isn’t really American, and therefore not even President, as well as other cards about how Jesus wants you to have a gun and also the Second Amendment protects all the others, which is their second favorite phrase after “we’re not going to give up our guns no matter what.”

Somehow, Rudy gets onto a tangent about how he’s “just sick and tired” of all these terrible foreigners who come here who don’t even know what American freedom is about — for instance, he says in shocked amazement, did you know that they don’t even celebrate the 4th of July in foreign countries?

A little later, after more ranting about England and Australia’s designs on our guns, Rudy and Baby and the Texas Deacon join up with some Jesus people preaching about how America has become a “sexual charged society” — which seems a good moment (8:30) for Rudy to insert one more still photo of his special Gadsden flag rifle case and Baby’s pink AR-15. You figure that one out. Also, Rudy exclaims “Amen” to the preacher’s suggestion that JFK probably went to hell because he wasn’t saved. So: Guns, excellent; lust, bad. Hey, that actually sounds strangely familiar!

We hope you have found this video a useful explanation of why the Second Amendment keeps America free, and we will not give up our guns no matter what. 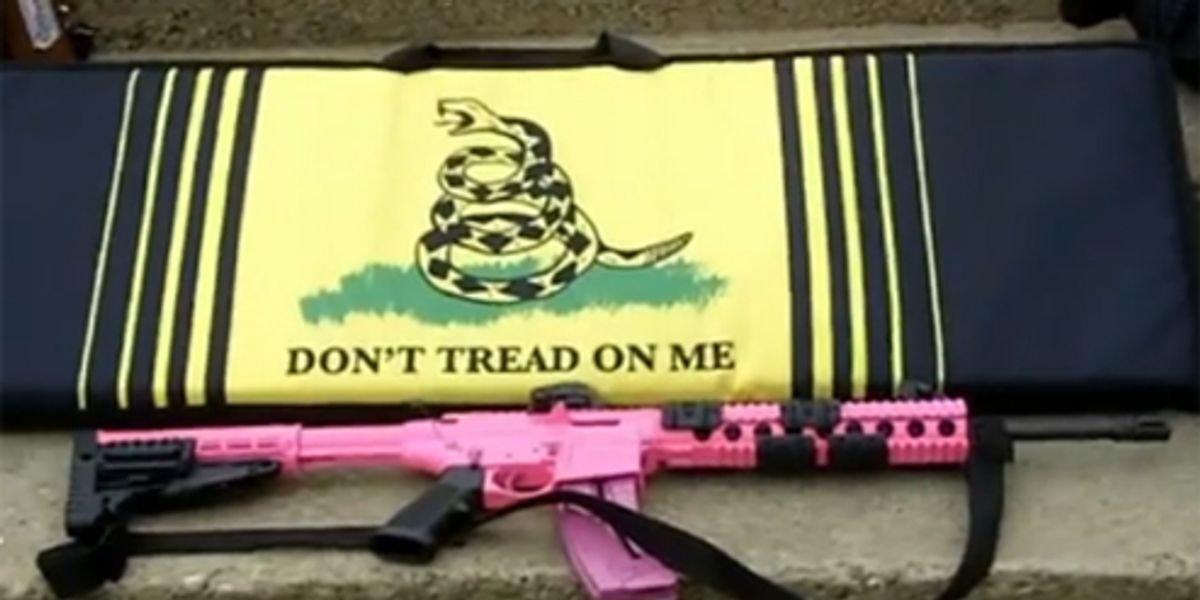 A group of Constitution-loving patriots from Come And Take It Dallas -- not the more familiar Open Carry Texas -- gathered in Dallas's Dealey Plaza, near the grassy knoll, on July 19 (the narrator keeps saying it's "June 19," but it's July) to...

Hey Witch, I read somewhere that if we had more guns that we would all be safer, but stuff like this makes me wonder, am I missing something?